Gobblin allows partitioning output data using a writer partitioner. This allows, for example, to write timestamped records to a different file depending on the timestamp of the record.

WriterPartitioners compute a partition key for each record. Some PartitionAwareDataWriterBuilder are unable to handle certain partition keys (for example, a writer that can only partition by date would expect a partition schema that only contains date information). If the writer cannot handle the partitioner key, Gobblin will throw an error. The Javadoc of partitioners should always include the schema it emits and the writer Javadoc should contain which schemas it accepts for ease of use. 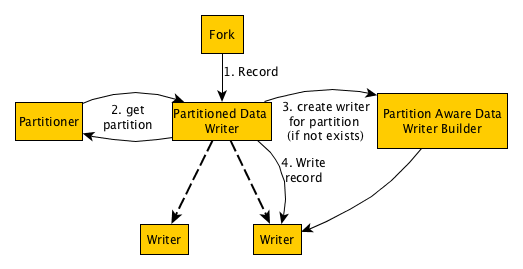 Gobblin always instantiates a PartitionedDataWriter for each fork. On construction, the partitioned writer:

The interface for a partitioner is

For an example of a partitioner implementation see gobblin.example.wikipedia.WikipediaPartitioner.

Each class that implements WriterPartitioner is required to have a public constructor with signature (State state, int numBranches, int branchId).

This is very similar to a regular DataWriterBuilder, with two differences: